Patients with functional neurological disorders present multiple symptoms that can be isolated or associated: Paralysis phenomena; sensitivity disorders of one or more limbs; abnormal movements of the type tremor, dystonia, or dyskinesia; dissociative seizures such as non-epileptic; certain primary neuropathic pains, focal or diffused, such as fibromyalgia and, almost constantly, fatigue. We can find a thorough description concerning all these symptoms on the website "neurosymptoms.org" which is in several languages.

These disorders represent a major neurological problem as they are the second reason for out-patient consultations, not to mention the many patients who have functional neuropathic pain, of cerebral origin, who are essentially taken care of by rheumatologists or pain centers. Disability can be major, as important as in multiple sclerosis, epilepsy or neuro-degenerative diseases. The cost of healthcare is very important because of an incessant demand for consultation, further examinations and the treatment of the handicap itself. Moreoften, these patients are not recognized as real neurological patients but are rather considered to have a psychiatric problem, which results in aggravating the distress of these patients. To characterize these patients, the terms hysteria, conversion, somatomorphes or psychosomatic disorders have been or are still wrongly used.

For the efficient management of each patient, it is necessary to consider three types of factors :

1° The predisposing factors. These can fall into genetic factors (clearly, there exists a genetic predisposition concerning these manifestations) but also from a past psychopathology, often created by a previous traumatic psychological event. It is known that, in patients with non-epileptic seizures, childhood sexual abuse is found at a higher frequency than in the general population.

2° Triggering factors at the moment of the onset of symptoms. It can be either due to a psychological stress, a physical trauma, or some other organic affection. Sometimes, we are not able to identify any triggering factor (1/3 of patients) (See table below). 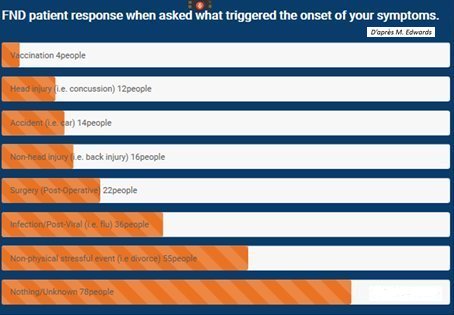 3° The perpetuating factors must be analysed, whether or not of psychological origin, which will maintain symptoms, or even worsen them. Perpetual factors, frequently encountered are depression, anxiety and emotional control. Specific management / support is therefore essential.